All articles tagged with "Abuse"

Lady Stefanie was not happy that this guy was too proud. In fact, she was repulsed by it but the guy thought that his pride and confidence were a turn on. She shocked him to the core when she humiliated him for having a small cock. She made sure he knew it and she dented his pride and his confidence. But she made sure it did not go too low. Just low enough to stop him from being cocky.

This guy has a small cock but he had the nerve to complain about how mistress Anastasia looks. She was pissed at that nonsense and she felt that she had to dominate the guy as cruelly as she could. That is what led to the mistress using her sph fetish to dominate him. She made fun of his small dick and killed his ego especially sexually and then reminded him that he had started it.

This mistress loves big dicks and she is not shy to admit it. And when she noticed that her next lay had a small one, she knew he had to get the fuck out of her house as she was not going to fuck him. He had to leave her house as fast as possible so that she could find something else to do to take care of her horniness.

Lady Fenja could tell that this guy had a tiny dick. And so she teased him and made him think she wanted him not knowing that all she wanted from him was to humiliate him and turn him into a toy for her to use for her own fun. And so she showed off her hot ass and big tits before she made him remove his dick and she pretended to be surprised that it was small and then started to make fun of it.

Lady Alshari had never seen such a tiny penis in his life. The mistress used her small penis humiliation fetish to dominate the guy. There was no way she was going to let him fuck her with that small dick so she turned it from sex to be the humiliation of him. She even took a video of it so that she would never forget that moment and that dick. 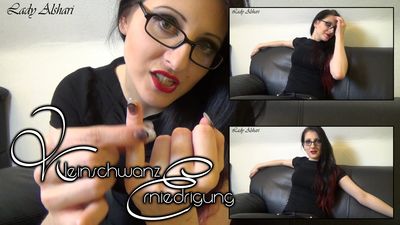 Mistress Emily was looking forward to having her pussy destroyed by this guy and they made out and she was even hornier. But when she saw his dick, she immediately got turned off as she could not imagine being fucked by such a small dick. She loved monster cocks and she knew she would not get satisfied. So she told the guy to go and jerk off and she would do the same.

Mistress Xenia loves to find ways to blackmail guys and today she did it to this loser because he had a small dick. The mistress loved that this guy was both loaded, had an ego and he had a small cock. That was the perfect guy to blackmail as he did not want his secret to go out. So she teased him and filmed their encounter. And then she used the video to blackmail him.